FUD vs. The Piano and the piano wins.

It’s an old advertising cliche that I think should be buried along with those Camel cigarette ads about how more doctors smoking Camels blah, blah blah.

Fear, uncertainty and doubt. The art of scaring your prospects into buying your stuff. Point out how horrible their lives will be without you. Warn them. Threaten them. Push them around. Show ’em who’s boss and they’ll come running cash in hand begging for your guidance.

I’ve sold a LOT of technology to technologists and over and over I’ve had to deal with marketing people wanting a hot, steaming bowl of FUD in their marketing.

And over and over again I’ve fought against it.

Think about this. Let’s say you’re working at a company that rides you like a rental horse. The culture is one of punishment and bullying. Someone is always yelling at you because, well, they just do.

Studies have shown that in environments like this, people learn how to avoid punishment by doing the bare minimum. They no longer care about the company success. They’re not part of “the team.” They disconnect from the organization and just avoid the beatings.

FUD is like that. You’re going to make me feel bad? To hell with you, I’ll go somewhere else. One can’t bully buyers or employees and ultimately be successful.

Somehow pianos figure into many of my advertising stories. I own a piano but I can’t play it. I play upright bass but nobody writes stories about those.

This comes from a guy named John Caples. He wrote an ad for mail order music lessons back in 1926 and, to me, is a great reason to bury FUD forever.

The headline was “They laughed when I sat down to play the piano but then I started to play!”

(A quick aside. I won a Caples Award many years ago for a dimensional direct response campaign. Actually, I won a BEST IN SHOW Caples Award. I beat out Ogivly, BBDO, Chiat/Day etc. Yeah, I know. I’m bragging. The only reason I bring that up, beyond the bragging part, is that at the time in my misspent youth I had no idea who “Caples” was. Now I do, and now you do too.)

John Caples wrote that ad and did something powerful.

He proved FUD was wrong. He was selling mail order music lessons. A pile of paper you could use to start learning to play a piano.

He talked about how people will love being around you when you CAN play the piano. Remember, in 1926 there wasn’t a lot of entertainment. Having a piano in the house was important and if you could play, people would come to listen.

That’s what he sold. Being popular and well liked.

And he was bloody right. We all want to visualize success and if some marketing helps us visualize success then we’ll listen. Look at Coke commercials. They’re selling sugar water by showing people having more fun than you’ll ever have. They’re not saying “Coke isn’t quite as toxic as Mountain Dew!”

I really love this ad. It’s engaging, the headline and illustration pull you in and by the end of it, you’re envisioning yourself playing a piano for a bunch of friends in a parlor on a spring afternoon with lemonade or tequila or something.

Help your prospects dream. Respect them enough to realize you can’t bully them into believing you. And then learn to play a piano. 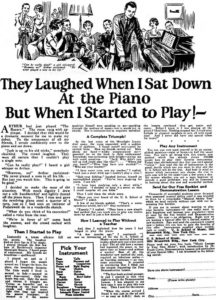